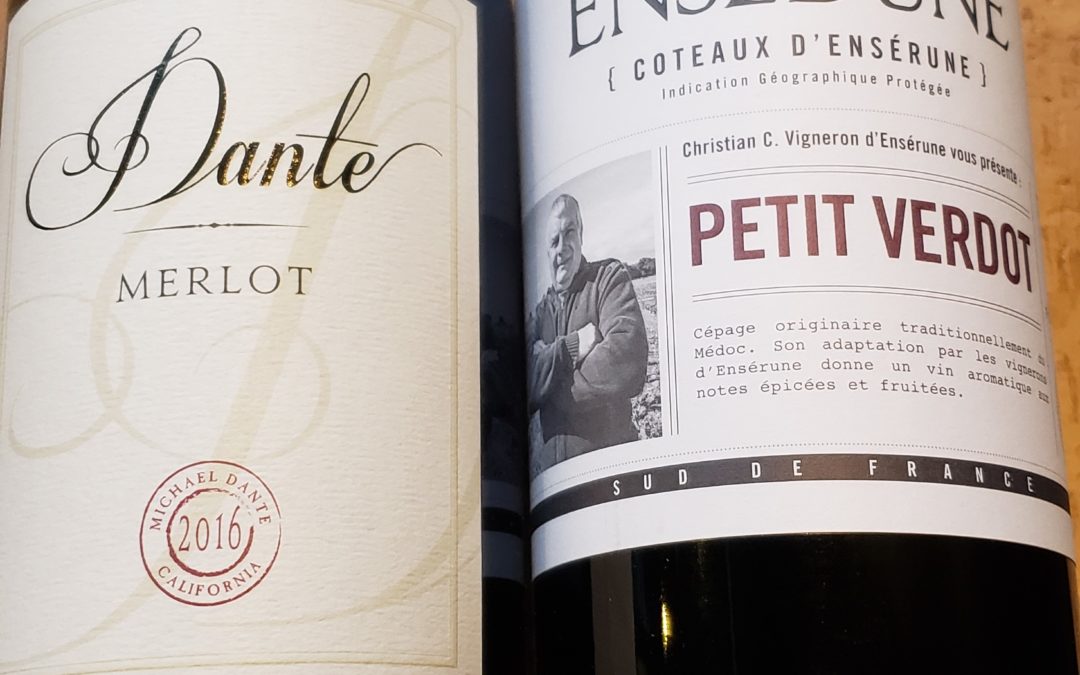 The 2016 Dante Merlot from Michael Pozzan comes to us from California. Merlot is an easy-going red variety with generous fruit and a supple texture, Merlot can be made into a range of styles from everyday-drinking to world-renowned and age-worthy. Merlot is the dominant variety in the best wines from Bordeaux’s Right Bank regions of St. Emilion and Pomerol where it is blended with Cabernet Franc. On the Left Bank in the Medoc, it plays a supporting role to Cabernet Sauvignon—in both cases resulting in some of the longest-lived and highest-quality wines in the world. Merlot also frequently shines on its own, particularly from California’s Napa Valley.

Merlot is known to be a dry, red wine known for its soft, silky texture and approachable flavors of ripe plum, red and black cherry and raspberry. From cool climates, Merlot wines will express earthy and herbal notes, while Merlot from warmer regions is generally more straightforward and fruit-focused.

This particular bottle sees 18 months of aging in French oak and is expressive in the glass, with aromas of black plum and freshly roasted coffee leaping from the glass. The mouth is soft and flavors of blueberries and milk chocolate start to come out. Baking spices like cinnamon and nutmeg are found throughout the finish. You can enjoy this with a classic marinara or Bolognese sauce or try lamb. The sweetness of the meat picks up on the sweet fruit flavors of the wine to create a harmonious balance.

We are visiting another bottle in the Ensadune line, this time with 100% Petit Verdot being the grape of choice. Producing full-bodied, rustic and deeply colored reds, Petit Verdot is one of the original Bordeaux varieties. Its bold structure, color and aromatics allow it to make a significant difference in blends with Cabernet Sauvignon, Merlot, Malbec and Cabernet Franc—even in modest amounts. While it isn’t planted in Bordeaux in great quantities anymore, it is showing a small revival in well-tended vineyards there. Petit Verdot can also produce phenomenal single-varietal wines in the hotter and drier subregions of Australia, South America, California and Washington State.

Petit Verdot makes an intriguing wine with qualities typically showing of blackberry, plum, blueberry, or black cherry as well as violets and dried sage. Its thick skins result in a highly structured wine with tannins ranging from smooth to grainy, which take well to oak aging.

This bottling is grown near the village of Puisserguier in southern France. The vineyards along the rivers have deep alluvial soils and helps produce a growing climate that is damp. It is a bright ruby red color with a nose that is fruity with cherry and raspberry aroma. In the mouth, a well-balanced wine and built for things like roasted pork or grilled lamb. Hard and salty cheeses such as Pecorino, Manchego or aged cheddar can make fun pairings alongside this Petit Verdot.