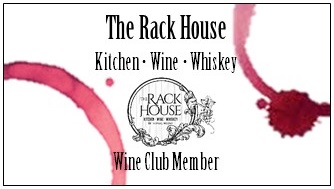 This quarter we are excited to offer a few newer wines and one that is not even on our list, yet.  As a member we want to make sure you get in on the ground floor for some of our offerings.  We have a few bottles left over from our Scarpetta Wine Dinner that was a huge success!  Please see Josh about swapping out any of this quarters bottles for something from the dinner or email him at josh@therackhousekww.com to find out the remaining selections. These will be available until we run out.  Take a look below for the offerings this quarter.  Cheers!

The first red offering highlights the complexity of a bolder Cabernet as opposed to last quarter’s bottle of a lighter style Cabernet.  Last quarter we offered The Dreaming Tree from the North Coast of California.  Irony is also from the same region, but stands up to be bolder.

This Cabernet Sauvignon is a combination of small lots from premiere vineyards throughout the North Coast, providing a dynamic spectrum of characteristics and flavors for the final blend. From the warmer, inland valley terroirs of Solano county to the cool coastal influences of the Pacific and Clear Lake in Mendocino, Lake and Sonoma counties, 2014 Irony Cabernet Sauvignon is a precious, handcrafted combination of ripe, concentrated flavors, balanced acidity and layered complexity.

Grapes for Irony Cabernet Sauvignon were harvested in the early morning hours at each lot’s peak of ripeness. Upon arrival at the winery, the grapes were crushed into small stainless steel fermenters. Fermentation lasted for seven days. After primary fermentation, the wine was gently pressed and transferred onto a combination of French and American oak to complete secondary fermentation and age for twelve months.

The second red bottle comes to us from Germany, Peter Brum.  This 100% Dornfelder grape drinks wonderfully on the warm days ending summer.  This chilled Vino Noir is an easy drinking, velvety texture.  This is a fruit forward wine with notes of fresh cherry and wild berries.  Another reason this unique red makes the cut is that it can pair well with a variety of meats from the grill. The Dorenfelder grape is Germany’s second most planted grape since its creation in 1956.  This was achieved by crossing two other well-known grapes, Helfensteiner and Heroldrebe, which themselves find ancestry from a slew of other German grapes. 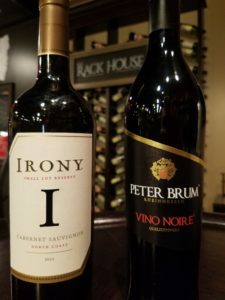 The producers of Innocent Bystander Sauvignon Blanc 2015 help make up the 58,300 acres in the Marlborough region of New Zealand.  This bottle was selected to showcase what a great value a true to style, 90 point (Wine Enthuiest) bottle could offer.  The bottle comliments others on our list due to its bright aromas of lemon and grapefruit peel and fresh passionfruit. The palate shows lemons, peach and nectarine, but with a lip smacking fresh acidity that keeps you longing for the next glass. The experience is crisp, zesty and refreshing.

Marlborough, is at the northern tip of New Zealand’s South Island. The rapid development of the Marlborough Sauvignon Blanc is one of the most dramatic events in the world of wine. The intense and readily accessible flavor of a classic Marlborough style has captured a vast market around the globe, from the United States and Canada to the UK and northern Europe, Australia and Japan. In 2015, Sauvignon Blanc accounted for around 85% of New Zealand’s wine exports.

The second white bottle, Pavan, is produced in the Veneto region of Italy.  Veneto is a northeastern Italian region stretching from the Dolomite Mountains to the Adriatic Sea.  This wine is made in the classic frizzante (half sparkling) style out of 100% Moscato grapes.  The small production of just 4,000 cases makes this accessable but not able to flood the market making this another great find.  This visually straw-yellow wine comes across the palate with a great flavor of bright green apple and melons.  This is another easy drinking selection with an alcohol content of just 7% to help the drinkability. 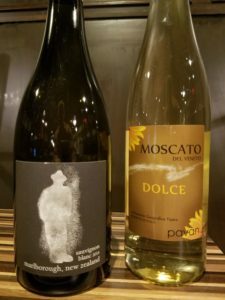 Casal Garcia is a non-vintage rosé blend from Vinho Verde.  The Vinho Verde is a DOC (Denominazione di Origine Controllata) in the Minho region of north-western Portugal. Each year it is responsible for vast quantities of straw-yellow, light-bodied, tangily tart wines produced from many thousands of small farms throughout the region.

A quantity of the wines made here are so fresh and youthful that they earn the moniker verde (‘green’), which applies even to the reds. Although not sufficiently effervescent to be officially classed as sparkling wines, much white Vinho Verde has an obvious petillance.  This is a light and spritzy rosé, with red berry and watermelon flavors that carry through to the crisp finish.

A newcomer that you, as a Wine Club Member, are getting first crack at, was rated by Robert Parker at a score of 89.  He talked about the Terre del Volturno Pallagrello Bianco Fontanavigna 2011 as being “The estate is among the wineries that are focusing on a handful of once-forgotten, ancient varieties that are today being rediscovered. This particular set of new releases is a bit uneven across the board, but when Terra del Principe gets it right, the wines are among the best in Campania, and Italy, for that matter.”  This is a 100% Pallagrello bianco coming from the vinyards of Mascioni (30%), Piancastelli (30%), and Bosco Agnese (40%) and being grown across the region in volcanic soils with stones, sand, and clay.

The 2011 vintage was picked between early August and September by hand.  From there they are processed by a soft crushing and pressing, fermentation in stainless steel with a temperature range between 57-59° F.  The wine then stays on noble lees for 6 months.  The 2011 was a tough year. It was generally smooth until mid-August through the last two weeks of the month with scorching temperatures, to be remembered as perhaps the warmest of the last years in memory. After mid-August temperatures, and were accompanied by hot dry winds, which overheated the grapes. Harvest, therefore, was advanced to avoid early maturation.  The wine is light straw-yellow in color.  On the nose there are notes of fresh fruit, apples, pineapple, and melon. To the taste the wine is balanced between freshness and softness, with a good minerality, persistently aromatic flavors, and a long finish of dried apricots.  Food for this bottle can cover baked oysters with a ground red pepper, parmesan and breadcrumb topping, to fresh buffalo mozzarella, and even sautéed mushrooms with fresh herbs.

Since this is such a new bottle to The Rack House KWW, I wanted to take a moment and give a little more history on the grape itself since it is such a unique offering, especially given the vintage.  This will be joining a few other new bottles on September 12th, as we turn over yet another page in adding new wines.  Pallagrello Bianco is a much-loved, yet almost extinct, green-skinned grape variety thought to have originated in Campania, Italy, or possibly ancient Greece. Like its black-skinned sibling, Pallagrello Nero, it was thought to have been wiped out due to phylloxera, a powdery mildew. During the following “forgotten era”, Pallagrello Bianco was mistaken for another grape, Coda di Volpe. However, its true identity was rediscovered in the 1990s by Italian vine grower and former lawyer Peppe Mancini, who has since replanted it and the nero variant.

In the 18th Century, when the royal House of Bourbon ruled Naples and Sicily, Pallagrello Bianco became a favorite of King Ferdinand IV. He set aside a place for the grape in his famous Vigna del Ventaglio, or Fan (-shaped) Vineyard, which was reserved only for his favorite vines. Back then, the grape was revered for its ability to make vini buoni e serbevoli (high-quality and long-lasting wines) – a characteristic that is valued once again by modern-day producers.

Pallagrello Bianco vines produce small bunches of small berries. The grapes are high in sugar and low in acid. Locals traditionally dried some of them for use in their cakes and pastries because of these qualities. Wines produced from Pallagrello Bianco are rich, yet soft, with a wide range of aromas, from peach and apricot though to honey, wax and even almond and vanilla (when aged in oak). The wines tend to have a full and succulent feel in the mouth. 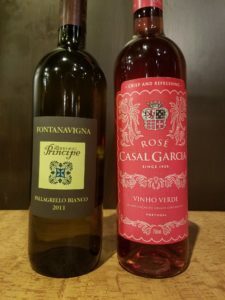 The Rack House KWW Wine Club is ideal for those who have a taste for the flavors of the world. Enjoy quarterly selections handpicked by our sommelier. Discounts, gift cards, exclusive events and free desserts are just some of the perks for being a member.