This quarter we will be offering great wines for the hot summer months.

In our all white selection we are offering a great Pinot Gris from Germany. Villa Wolf was founded in the Pfalz region in 1756. Once known as J.L Wolf Estate, the Villa Wolf has seen the vineyard go from an almost forgotten estate to being revitalized by the one and only Dr. Ernest Loosen in 1996. Shortly after that dramatic turnaround, Sumi Gebauer and Patrick Möllen¬dorf, once under Dr. Loosen, took over management of the estate in 2011. Dr. Loosen said, “The goal at Villa Wolf is to produce wines that express the pure, authentic terroir of the Pfalz.” Villa Wolf has made a great run with the Rieslings mostly because they are drier and more full-bodied than Mosel Rieslings, with fully ripe fruit flavors and a characteristic stoniness in the aroma. The Pfalz region also has a long tradition with other grape varieties, allowing Ernst and his new management team to expand their winemaking palette to include Pinot Blanc, Pinot Gris, Pinot Noir, Gewürztraminer, and Dornfelder. To preserve the naturally high quality of the vineyards, they employ sustainable viticultural practices and emphasize gentle handling of the fruit through traditional, minimalist winemaking. With the Pfalz region situated southeast from Mosel, Pfalz is Germany’s second largest planted wine region. The French growing region of Alsace sits directly to the south of Pfalz and both growing regions enjoy protection from the Haardt Mountains from the cold and wet Atlantic weather, making Pfalz one of the warmer and drier areas of Germany. The Rhine River in on the Southeast side of both the French and German growing regions. Because of this unusually warm and dry climate, almonds, figs, and lemons are grown in this region as well. Naturally, wine grapes also do quite well here where it is possible to achieve full ripeness in every vintage. The predominant soil type in this area is a well-drained, weathered sandstone. It produces wines with a fruit-driven purity and a stony structure. Outcroppings of limestone and basalt in certain vineyards add complexity and distinctive textures to the wines from those sites.

This vintage saw a warm spring and started off an early growing season. It was slowed by a round of frost in April that inhibited shoot growth and made training the vines very difficult. A warm, wet summer promoted rapid fruit development, but also botrytis. “Through extensive vineyard work, however, our team was able to harvest a clean, healthy crop in September. In spite of the challenges, the wines have excellent ripeness and bright, refreshing acidity”, says Gebauer. This is a full-bodied, dry style Pinot Gris with fresh, unoaked fruit and a crisp texture. It is an excellent partner for salmon, chicken, or pork.

For our second offering we make our way over to the town of Tezze in the municipality of Vazzola, located in the central eastern area of the Province of Treviso, Italy. Nestled in the shadow of Northern Italy’s Dolomites and in the heart of Veneto’s famed Treviso District, Bonotto delle Tezze is a winery with ancient and historic ties to Venetian winemaking traditions. Founded over 600 years ago near the tiny hamlet of Malanotte, the estate was 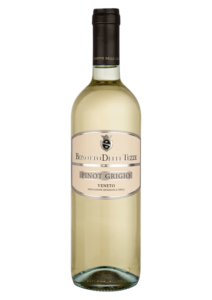 known for centuries as the primary wine supplier to the region’s aristocracy. In modern times, the Bonotto family’s growing efforts have become internationally known, and their focus in the cultivation and preservation of the ancient Raboso grape have established the winery as one of the most vital contributors to Northern Italy’s wine industry.

For the Pinot Grigio, there is a short maceration (the process where the phenolic materials, tannins, coloring agents, and flavor compounds, are leached from the grape skins, seeds and stems into the must.) with the skins and then fermentation in steel vats at a low temperature. Once the wine is completely settled, it is bottled and then released onto the market.
This wine is straw yellow in color, fresh and floral aromas reminiscent of freshly picked fruit. Properly aromatic with good structure to accompany a beautiful and fresh drinkability that is meant for consuming now.

All Red Selection
Our first offerning in the red selection finds a chilled red wine for the warm summer. Valckenberg Dornefelder is our second wine from Germany this quarter, even following in the Rheinhessen region. Dornfelder is a relatively recent arrival on the wine grape scene, having been created in 1956 by August Herold as a crossing of Helfensteiner and Heroldrebe. However, since Helfensteiner and Heroldrebe are also crossings, its lineage includes almost every red wine grape grown in Germany. It is especially important in the Rheinhessen and Pfalz regions and is the second most widely planted red grape variety in Germany. This wine is a smooth, medium- 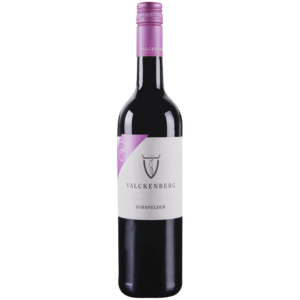 bodied, lightly sweet red with notes of ripe cherries and black currants bursting on the palate, followed by a distinctive vanilla note on the velvety finish. It is a versatile wine that pairs with spicy beef dishes, barbecue, pasta with marinara, pizza, or even with cherry pie or dark chocolate.

California has 17 grape crush districts. Monterey County is District 7. The district 7 Pinot Noir has been a great transition from the fruit driven Pinot we started with as we came out of our transition from Missouri wines. Of all

grape varieties, Pinot Noir is the most sensitive to its terroir. The cool temperatures of District 7 present ideal growing conditions for Pinot Noir. Each afternoon, the reliable winds from the Monterey Bay come howling down the valley, keeping the estate vineyards at a moderate temperature. The wine was carefully aged in a combination of new and neutral oak, to craft a lush, elegant wine with bright fruit aromas and vivid flavors.
An elegant, balanced offering, D7 Pinot Noir is the ultimate food wine. Aromas of cherries, raspberries, and pomegranates entice with hints of vanilla and mocha. Medium bodied with soft tannins, the bright red fruit finish wraps up with a lingering note of sweet oak. Look to pair this wine up with mushroom dishes, grilled salmon, roast duck, pork tenderloin, or soft-ripened cheeses.

Josh’s Selection
As always, we strive to bring new and exciting wines in for our wine club members and this quarter is no exception. While Pinot Noir can be vastly different from region to region, between wine makers, and even with the different clones, Pinot Noir continues to be a great staple on our menu. Romania may not be the first place you think of when you are looking to buy a Pinot Noir but this has all the classic bright

red fruit flavors and spicy note you would expect. Cramele Recas, the producer of Incanta, was formed in 1998 by British born Philip Cox, Commercial Director and Elvira Cox, Export Director and they now produce the highest-selling Pinot Grigio in the UK. Cramele Recas is also Romania’s biggest exporter of bottled wine. The name Incanta comes from the Romanian verb “to enchant, charm or delight” often used to describe rare flowers.The nose has delicate aromas of cherry and raspberry. These flavours are matched on the palate with the addition on notes of flowers and sweet spice. Try this with cured meats or cheeses.

Just as a great Pinot Noir is vital to almost any menu, a stand out unoaked Chardonnay is sure to please the masses, even the non-Chardonnay drinks! Most of the time whe someone does not like Chardonnay, they don’t enjoy the heavy, overly oaked, super buttery style of Chardonnay. Louis Jadot is on the whole other end of the spectrum of Chardonnay since it uses zero oak. Louis Henry Denis Jadot founded Maison Louis Jadot as a negociant (wine merchant) house in 1859, but he quickly began acquiring some of Burgundy’s premier vineyards. His son and grandson, both also named Louis, expanded the company’s holdings and its marketing over the decades. After World War II, Louis Auguste Jadot’s export sales got a big push into the U.S. and Great

Britain with the help of importer Rudy Kopf, the founder of the New York-based Kobrand Corp. After Louis Auguste’s premature death in 1962, his assistant, Andre Gagey, took over the management of the Jadot family-owned winery. He hired Jacques Lardiere, one of Europe’s most renowned winemakers who remained with the company for more than 40 years. Gagey also hired his son Pierre-Henry Gagey in 1984. He succeeded his father and still runs Maison Louis Jadot, which last year produced 850,000 cases of wine from its 582 acres of Burgundy vineyards. The grapes used to produce this Louis Jadot Chardonnay are grown in the Macon-Villages region, an area made up of different communities of the Macon district in southern Burgundy. The designation connotes a step-up in quality from just Macon, according to Jancis Robinson in The Oxford Companion to Wine. This Chardonnay is extremely versatile with poultry and white meat, shellfish, grilled tuna, salads, or even on its own to sip on the patio in the hot summer months.

The Rack House KWW Wine Club is ideal for those who have a taste for the flavors of the world. Enjoy quarterly selections handpicked by our sommelier. Discounts, gift cards, exclusive events and free desserts are just some of the perks for being a member.